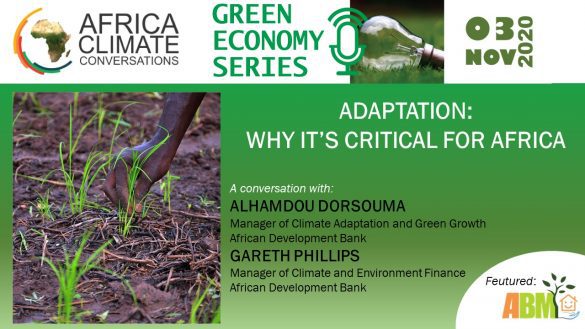 33 out of 47 countries listed with the United Nations list of least developed countries are in Africa. The continent is the most vulnerable to climate change despite being the least emitter contributing about four percent of global carbon emissions. Most of Africa’s economy depends on climate-sensitive sectors such as Natural resources, agriculture, coastal infrastructure, energy, and water.

Also listen to Economics of Climate Change: challenges and opportunities.

Gareth Phillips, AfDB’s Climate and Environment Manager who explains about the Adaptation Benefits Mechanism (ABM), says resilience is essential, and the continent will not achieve the Paris agreement targets if it does not address resilience.

“The governments and consumers in developed world need to recognise that they have to contribute towards the cost associated with adapting to the impacts that are caused by the greenhouse gases released by the goods and services we buy.”

This Episode is part of a five-part green economy series made possible by a collaboration between the Africa Climate Conversations and the continent’s premier development finance institution – the African Development Bank Group, particularly its climate change and green growth department.