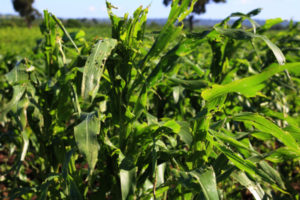 In 2011 the Maize lethal Necrosis (MLN) a disease causing an estimated 30 percent total maize loss in farmers’ fields according to the International Maize and Wheat Improvement Center (CIMMYT) first emerged in Kenya spreading to other parts of East Africa.

The disease caused by infections from the Maize Chlorotic Mottle Virus and the Sugarcane Mosaic Virus, negatively impacted livelihoods and food security among farmers and families who consider maize a stable food while posing a threat to regional maize trade.

As noted by the East Africa Community Sectoral Council on Agriculture and Food Security, the disease that causes premature plant death, poorly formed maize cobs, can lead to up to 100 percent yield loss in farmers’ fields.

A 2013 plant testing in Kenya indicated that 122 out of 124 commercial maize varieties were extremely susceptible to MLN. Intensive breeding efforts by CIMMYT maize global program and national maize breeding programs to develop new resistant or MLN-tolerant varieties developed a total of nine MLN-tolerant/resistant hybrids released in Kenya, Tanzania and Uganda.