Is the Paris Outcome a Panacea to global warming? 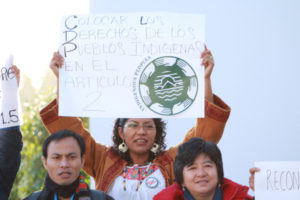 Indigenous people make demanding their rights at the COP21

This  ambitious coalition made up of over 90 countries lead by the Marshal Island, coalesced to fight for an ambitious mechanism of 1.5 temperature goal.

In addition to the 1.5 degrees temperature target, they are calling for 5 year review of the soon to be signed Paris agreement, clear pathway for a low carbon future and a strong financial package for developing countries which includes $100bn per year.

Of interest is the attention the coalition is attracting among developed rich countries who were not keen to support the 1.5degree temperature goal initially fronted by the civil society organizations and the scientific community.

In 2010, the Cancun agreement agreed to limit the temperature rise to 2 degrees Celsius. But in June 2015, a structured expert dialogue made up of more than 70 scientists, climate experts and negotiators concluded that this limit was inadequate and should only be used as an upper limit.

A higher limit could lead to sea level rise threatening the existence of the small island nations and also threatening food security and livestock farming in Africa.

This change of view from a host of developed nations among them the United States of America, Australia, Canada and Russia has been criticized as being in the forefront of the championing for the 1.5 degrees limit but doing nothing to meet their fair shares in their  Intended Nationally Determined Contributions (INDC’s). Through INDCs submitted countries have pledged to reduce their carbon emissions in order to achieve the temperature goal

“1.5degrees calls from developed nations to drastically cut down their emissions now in pre 2020 and also post 2020” says Augustine Njamshi of the Pan African climate justice alliance (PACJA) “developed countries now shouting and pushing countries to support the 1.5 degrees needs to understand that this calls for everyone to meet their fair shares now! If they don’t this is just a stunt for the world” explained Augustine. 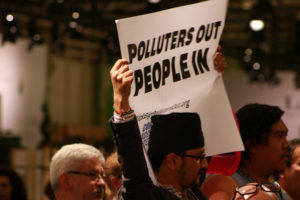 Civil society demonstrate after the ministerial draft was released

According to Lidy Nacpil of the Asian People Movement on Debt and Development, western countries do not want to pay for compensation for the loss and damage which the small islands are trading off to achieve 1.5degrees mention on the final text.

The fair shares a civil society equity review of INDCs report indicates that the USA, Brazil, Russia and the European Union pledges falls drastically short of its fair share compared to least emitters developing countries such as Kenya, China, India and the Marshall Island whose pledges exceed their individual fair shares.

“Rich countries in support of the push are not following up with ambition target of their own but are pushing the climate burden to emerging markets such as India, china, Brazil and emerging market economies among developing countries” explained Nacpil

Mohammed Adow of Christian aid, also notes that the rich countries in support of the 1.5 degrees target are also vague on what actions their will take to achieve the ambitious target

“To limit the global temperatures to 1.5degrees at this late stage in the process is to get the right hook in the agreement” argues Adow “these countries don’t act unless the world is watching. There is need to have them a political moment that forces them to scale up their ambition both on finance and mitigation for us to deliver on the 1.5 commitment”

How do we achieve the 1.5 temperature ambition?

To get to 1.5 degrees, the world needs to fully decarbonize by 2050. This will require for the developed nations to be fully on renewable energy by 2030 and give the developing nations a 20 year old window period to develop and fully be on renewable around 2050.

Sunita Narain the director general of the Centre for Science and Environment (CSE) says that it’s all about the remaining carbon budget therefore China and India will not be joining the bandwagon “I.5 ambition is all about the carbon space” argues Sunita “the developed countries have to start reducing substantially and making space which they will not do. Therefore for India and china by agreeing to 1.5 means they will have to give up developments as there is no space left for development”

India, China and Africa already meeting their fair share have been pushing for climate justice which to them is a right to development. By calling for climate justice they require for developed countries responsible for the cumulative emissions to drastically cut their emissions and honor the article 4 of the Kyoto protocol to provide new and additional finance, technology transfer and capacity for the poor nations to adapt to effects of climate change.

“The carbon cake has to be shared fairly to enrich poor countries and ensure they have their share to grow. we have to ensure they poor nations have access to finance, technology and the capacity they need to mitigate further emissions” said an anonymous source.

Nacpil points out that in addition to not meeting their fair shares, the developing nations are widening the gap on the financial differentiation and do not want to commit to any new or additional finance which makes achieving the goal impossible.

Scientists warn that today, the world is already 0.85 degrees warmer than pre-industrial levels, and many people and ecosystems are already experiencing devastating impacts and exceeding 1.5 degrees will entail unacceptable consequences for billions of people and risks crossing irreversible tipping points. But Sunita warns that as long as the development countries do not do their fair shares, and the developing countries do not get the means of implementation, the 1.5 temperature target will never be achieved

The Journey to COP26: Building Momentum