Nearly three years ago, on a rainy Thursday night at around midnight, 39-year-old Mary Wambui clung to her unborn baby.

“The rain was too heavy! The lightning and thunderstorms were terrifying. My husband was not at home. I felt an unexplained fear for my sons,” the mother of five from Gitugi village in Murang’a county, central Kenya, told Africa Climate Conversations.

About two and a half hours later, she woke up to an awkward dream—the chicken which lived in a separate pen squawking right in her bedroom.

Wambui tried sitting up to make sense of what was going on. To her surprise, she lay on a wet, muddy ground. Her first thought was that a nearby public water access point had broken and flooded her house.

Two landslides had hit her farm and a nearby village while she and her two sons slept—their three-roomed house torn into two, separating her from her sons sleeping in their bedroom.

“On calling out to my sons, I realised one of them was buried in a pile of furniture’s and household items. It was pitch dark, I was stuck in mud and I could not move to save my own child,” she explains, looking away.

To date, Wambui does not understand how her sons got to her. But she recalls them pulling her out of mud, explaining that the grounds and trees seemed to be moving. Since they could not keep up with speed, they agreed to climb up and cling to the moving logs. Perhaps they would get to safety.

She lost her brother in law, three people in a nearby village also died. Her family luckily found safety. The local government relocated victims to a nearby polytechnic. Each family got a one-room house where Wambui’s family lives to date.

The local government promised to rebuild them a house if they purchased land at a safer ground.

“My husband and I are jobless. We lost everything that we could sell to purchase new property. We cannot sell our land as it is in an unsafe area. My husband is elderly and developed high blood pressure immediately after. He lives with the guilt of being away that night. I have nowhere to go,” she laments.

Now, the government wants her out. Her farm is the epicenter of the landslide is deemed unsafe for occupation, and she has gathered no money to buy a new, safer place.

Over the last five years, annually, a Kenyan family has suffered either flooding, landslide, or a drought.

Recurrent droughts and flood negatively affect their livelihoods. This contrasts with previous years where severe weather events happened after five years. These disasters do not allow families time to recover, pushing them deeper into poverty and exposing them to mental illnesses.

“The landslide reduced my family to squatters. I get panic attacks whenever it rains, thunders or loud noise. My son developed migraines that get worse during rains,” explains Wambui. “I was not a millionaire but I wasn’t drowning in poverty. I had my own property, livestock, and legally owned land. Today, my family depends on menial jobs I do to survive.”

The pressure to move, her sons’ safety, the balance between providing daily subsistence, and her family’s medical needs have led to continuous mental pressure.

“The doctor says I have developed ulcers and need counselling at Murang’a general hospital but where do I get the money? Each penny I get from menial jobs goes to food,” she explains.

Wambui is among 1.9 million Kenyans estimated to suffer from depression by the World Health Organization (WHO).

The 2020 National Mental Health Task Force has identified the effects of climate change effects- droughts and flooding among causes of suicide, post-traumatic stress disorder, and substance abuse. In July, the task force recommended that Kenya declare a mental health emergency.

The task force found that one in every two Kenyans suffers from a mental condition. Further, at least 25 percent of outpatients and 40 percent of inpatients in health facilities suffer mental illnesses.

The Center for Disease Control and Prevention ranks mental illnesses and substance abuse number five among the leading causes of Kenyan deaths.

Dr. Boniface Chitayi, a consultant psychiatrist with the Ministry of Health and Psychiatrist Board of Kenya president, told Africa Climate Conversations that access to mental health services is expensive and out of reach for many Kenyans.

“It costs about Ksh3,000 ($30) in a public facility and double that in a private facility to see a doctor and purchase medication. If the person is undergoing therapy, the cost goes up to Kshs10,000 ($100) for chronic care”.

Chitayi explains that losing property, job, or a loved one, forced migration or displacement, and “survivor guilt” creates physical discomfort, uncertainty, and stress.

“These natural disasters leave people suffering from anxiety, post-traumatic stress disorders, and trigger more serious illness like schizophrenia or substance abuse as a way of coping with increased stress.” 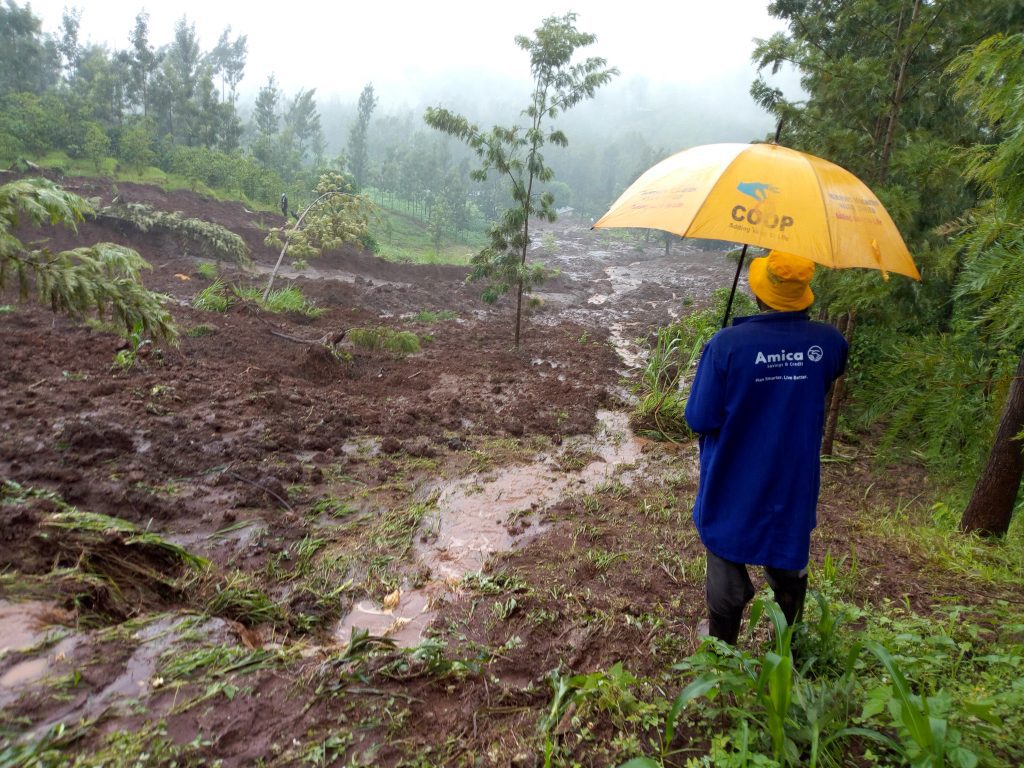 Wambui’s farm being the epicenter of the landslide is deemed unsafe for occupation.

Abubakar Salih Babiker, a climate scientist at the IGAD Climate Prediction and Application Centre (ICPAC) in Nairobi, while addressing Africa journalists during an online climate change training organised by Africa21 that Eastern Africa is getting wetter.

“The western part of the Indian Ocean has warmed rapidly during the past 100 years, causing more intense tropical cyclones in East Africa. During 2019, eight cyclones developed over the Indian Ocean, the highest amount since we have records,” explains Babiker.

A 2018 drought and the April-June 2019 rains’ delayed onset left 1.1 million Kenyans severely food insecure. By late 2019, over 100,000 people were affected by floods and landslides, according to the Red Cross.

This year alone, nearly 300 Kenyans have died, and over 800,000 displaced by floods and landslides. In May, Kenya recorded the highest rainfall amount ever captured in the last 40 years.

Also, read how Africa can build better given Covid19 and climate change impacts.

The UN Office for Disaster Risk Reduction estimates in the last 20 years, disasters have claimed 1.23 million lives – 60,000 people annually, and led to US$2.97 trillion in economic losses.

Chitayi reports an increased number of people suffering from anxiety and depression. He notes that mental related health issues are often forgotten amid other life-threatening disasters.

He says mental disorders in Kenya account for at least 13 percent of all illnesses but are allocated only 0.01 percent of the health budget.

Despite the burden, the number of psychiatrists in the country is about one psychiatrist for 500,000 people in urban areas-primarily Nairobi city, and one for three million people in rural areas.

“When a tragedy happens, there is no systematic way of addressing the trauma. Many people fall through the cracks and go on with life as normal, while carrying burdens in their hearts.”

The task force is lobbying for increased budgetary allocation, policy, and legal changes. Section 226 of the penal code criminalizes attempted suicide, and language used in some policies is derogatory, negating efforts to fight the stigma associated.

But for Wambui, “I pray every day for a safe, small space to shelter my children without returning them to the den of death. I am not interested in a big farm, just a small space to call home and never have to worry about eviction each time a car approach.”

Listen to our voices while restoring degraded lands,...

Ambitious African Forest restoration: What is the progress?

Energy Shift: How can Africa ensure a just...

It’s a wrap for the climate change impacts...