In 2010, when Kemba Wangoli lost his father, a clerical officer at Mumias Sugar Company, taking care of his siblings fell to him. All Wangoli had to pay their school fees was his family’s land to cultivate sugarcane. It didn’t take long for him to realize that the sugarcane industry was collapsing due to mismanagement and the threat of cheaper sugar imports.

The sugar miller’s payments to farmers were often delayed and sometimes defaulted. Wangoli eventually made the painful and unpopular decision to uproot the cane and plant maize and soybeans instead. That was eleven years ago.

In Kenya’s western region, where thousands of small-scale farmers depended on sugarcane as their sole cash crop, a failing sugar industry, land subdivision, and infertility, and poor agricultural practices have seen many unable to provide food security and improve livelihoods. To alleviate these challenges, public and non-governmental organizations have focused on popularizing and improving soybean production in the region. Many farmers have embraced the crop with visible benefits, though challenges including lack of markets, low prices, non-optimal production, and post-harvest handling dim the soybean promise.

In neighboring Vihiga, Monica Khagoni, 52, a widowed mother of two, knows how it feels to till an acre of land year after year and not harvest enough to feed a small family.

“Those days, I could plant maize and they got stunted and dried up. I harvested around twenty kilos of maize from a whole acre. This was because the land was infertile and then there was striga,” she said.

Striga, a parasitic plant commonly known as witchweed, was wreaking havoc on maize farms in the country’s western region. A 2012 study described it as “the greatest biological constraint to food production in sub-Saharan Africa,” and a bigger problem than insects, birds, and plant diseases.

Paul Woomer, a long-time coordinator of N2Africa, an NGO that focused on improving legumes’ growth, worked on soybean development in Kenya, wrote about striga’s infestation and management. East Africa in a paper in which he termed the weed as “a cause of food insecurity.” He stated that striga affects about 2.36 million ha of maize cropland resulting in grain loss of 1.62 million tons resulting in an economic loss of US $383 million per year.

Several organizations, including Bill and Melinda Gates Foundation, have advocated for soybean development in Kenya and other African countries. It is hoped that with such development initiatives, the continent will see an increase in the production of soybeans to meet its demand. The climate in most parts of Kenya is favorable for soybean growth. However, according to the US Department of Agriculture, the country has imported 80,000 metric tonnes of soybean in 2020, which is up 5,000 metric tonnes from last year’s imports. “Soybean imports into Africa in general and Kenya in particular is massive and unnecessary because the crop grows well in the tropics,” said Woomer. 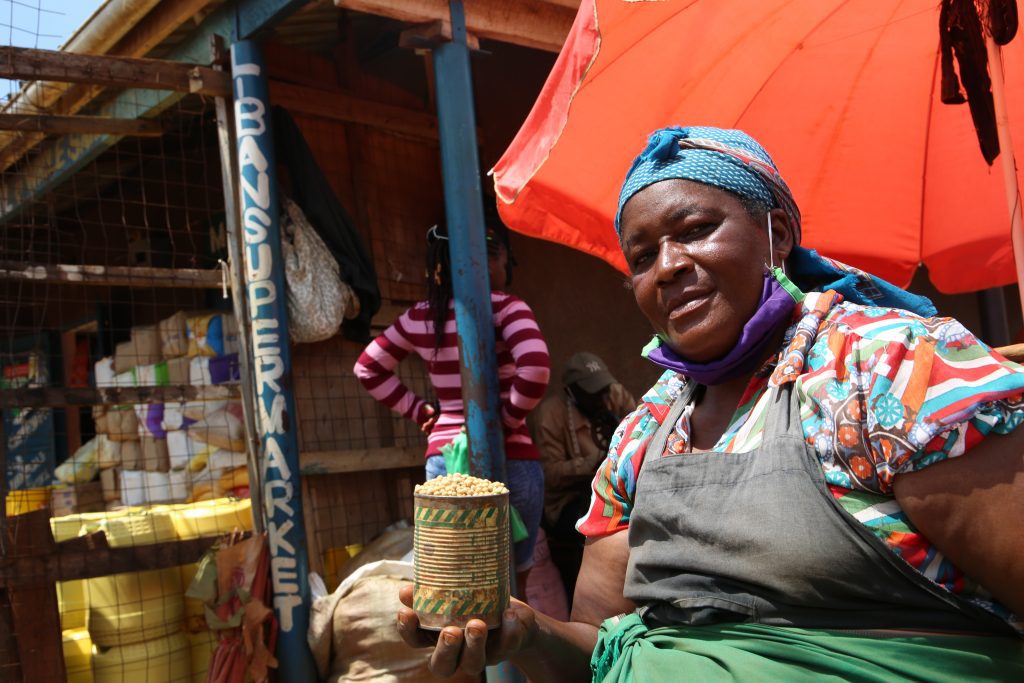 According to Woomer, Western Kenya was selected for the project because of its low fertility soils, which are very low in nitrogen, and because legumes can play an important role in the predominant maize-based smallholder farming systems. “Rather than food security, N2Africa was more targeted to nutritional security because legumes are rich in vegetable proteins and smallholder diets in west Kenya tend to be low in protein, especially among the poorest households,” he said.

Soybean is touted as one of the oldest crops grown by man with the highest protein concentration than other legumes or even beef and fish. Soybean’s history and health benefits surpass many foods, and its contribution to food security has been well documented.

However, concerns have been raised about the side effects and toxicity of soy protein, the protein derived from soybean meal. Soy protein is easily available in the form of nuts, milk, and cheese. Some studies have shown that with prolonged consumption, the soy protein can harm human organs, including the endocrine glands, and contribute toward pancreatic, breast, and thyroid gland cancer and have toxic effects on the kidney and liver.

In the N2Africa project, farmers were given seeds, trained on good agronomical practices, and engaged in seed multiplication. This ensured that farmers produced more seeds, which were distributed to more farmers. They were then trained on the many soybean uses and value addition, such as soy flour and soy milk.

Dick Morgan and his fellow farmers speak of an improvement of food security and income from soybeans’ growing. A crop of soybean from about a quarter of an acre is ready for harvest at his Itando village farm. His wife took up cooking mandazi (a type of fried bread) by blending soy flour and wheat flour and supplies them to neighboring Mbale town.

In Vunandi village, Khagoni and her fellow farmers can now harvest well from their farms. Vunandi farmers have, to a large extent, managed striga, and their yields have improved. Monica can comfortably harvest up to 10 bags of maize from one acre.

Woomer is confident that the project was beneficial. “From the perspective of ecosystem health, we also found the residual benefits of biological nitrogen fixation and its positive effects upon other crops, especially maize,” he said.

Morgan agrees that not every single farmer in Vihiga was involved in the project. The introduction of soybean in Western Kenya has an impact on food security and improved livelihoods. Still, there remain pockets that are not reached with the knowledge passed through N2Africa and similar projects.

Additionally, farmers in western Kenya may know about growing soybeans. Still, lack of markets, low prices, non-optimal production, and post-harvest handling seem to be the main problems hindering their prosperity. Wangoli believes that if these are addressed, they will earn more from soybeans.

Tips to compost kitchen waste in the balcony...

How Much Kitchen waste does your household generate?

Is Africa Investing enough in understanding its climate...

Are Floods, landslides, and drought dragging Kenyans to...